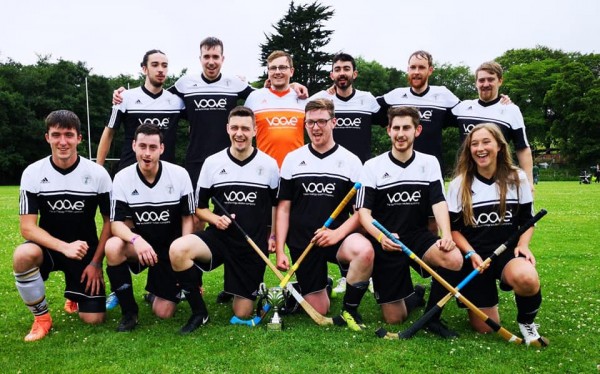 Uist Camanachd lifted their third Hebridean Celtic Festival Cup and their first since 2012 with a 5-3 victory over Camanachd Leòdhais at Bayhead, Stornoway in front of a healthy crowd.

Uist player-manager Graham Black had put together a good side, with some strong guest players to augment the native Uibhisteach talent, and with a youthful Dubh is Gorm side, with many making their HebCelt debut, it looked like it would be one of the most intriguing matches in years and so it proved.

Scott MacLeod opened the scoring for us on the quarter hour, but Uist levelled then went into the lead thanks to a penalty. Then Ruaraidh MacMillan levelled things to make it 2-2 just before half time.

Uist retook the lead in the second half, then added another swiftly, making it 4-2, but then Donald Lamont scored his seventh of the season to close the gap but Uist made sure of the Cup with a goal in the dying moments.Whilst it was disappointing from a Leòdhasach point of view, it was a well deserved victory in an entertaining match which stopped the Dubh is Gorm making it six wins in a row.

During the match Leòdhas’ Innes Lamont was taken to hospital with a head injury that required medical attention and everyone wishes him a swift recovery.

Many thanks to Henry MacInnes for refereeing. He named Uist’s Michael MacLeod as player of the match.

A great many thanks to the Hebridean Celtic Festival for their continued support of this fixture which is an invaluable tool for the promotion of shinty in the Western Isles.

Congratulations to Uist on their win and we look forward to next year’s clash with anticipation.