“Dubh is Gorm” – The Colours of Camanachd Leòdhais

Ever since Camanachd Leòdhais was re-constituted in 2006, the club have worn the colours black ‘dubh’ and blue ‘gorm’, hence the club nickname of “An Dubh is Gorm”. The strips have also been traditionally highlighted with either yellow-gold ‘òr-bhuidhe’ or white ‘ geal’; these being the two other colours in the club crest.

These colours were chosen due to their uniqueness in the world of shinty and for symbolic reasons.

Dubh – Black represents the peat soil of the island upon which shinty is played now, as well as the losses suffered by the Island in the Great War and Iolaire disaster, which subsequently led to many cultural changes including the disappearance of shinty from island life for at least 70 years.

Gorm – Blue represents the sea and ocean which encircles Lewis and Harris, and the island’s relationship with it, both provider and bereaver, the method of returning or emigrating, and also the way upon which the team must travel to play games on the Scottish mainland.

Òr-bhuidhe – The yellow-gold in the badge represents the beaches of Lewis and Harris, where shinty was often played on New Year’s Day and which continue to call out to islanders and visitors wherever in the world they are. It also represents the ties that shinty and Gaelic strengthen for young people to their island home, helping keep them connected with their community despite distance and time.

Geal – white text is used purely due to its design qualities, but can also be seen in the colour of the sand upon our islands’ beautiful beaches.

Depending on design, the club has had ‘Leòdhas’ on the back of the club shirt, following the tradition of Irish GAA teams in displaying the native language on playing shirts. There is a slight grammatical point to be made about the proper way to refer to the club in Gaelic. When referring to to just ‘Lewis’, Leòdhas should be used as the nominative form of the noun, the form found in the longer form Camanachd Leòdhais is the genitive/possessive form of the noun for Lewis. Camanachd Leòdhais – “Shinty of Lewis”, see also Eilean Leòdhais – Isle of Lewis. The club name should never be written as just Leòdhais. The club’s full title is Comann Camanachd Leòdhais.

The club has played in other colours at various points. Before reconstitution the previous Camanachd Leòdhais used the Back Camanachd colours of Red shirts and White Shorts.

In the very first match in 2007, a Minch Cup fixture with Lochbroom, the team wore Orange shirts and Black shorts. In a match against Lochbroom in 2013, the club also wore white shorts with the Dubh is Gorm to avoid a strip clash.

In 2011, the club played in Navy shirts and white shorts borrowed from Skye Camanachd for a match against Lochcarron.

Youth teams have often wore yellow shirts and blue socks, these also being the colours of the Nicolson Institute. 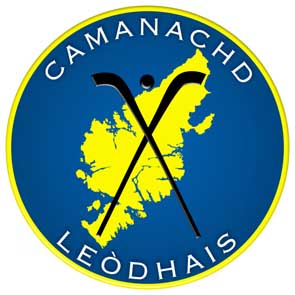