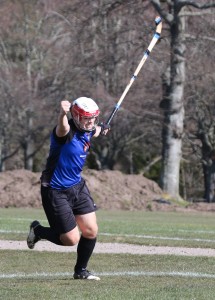 After a weather-delayed few weeks, the club finally got its Mowi North Division Two season back up in running in the best style with a record league win against a young Inverness reserves at the Bught Park outside pitch.

The club gave a debut to Ryan Symonds, but it was at the front that the club excelled from early on with a first half of energy and power.

Donald opened the scoring on 17 minutes, adding a second minutes later, before his brother Ally made it three on 21 minutes. Scott MacLeod made it four on 26 minutes and the game was out of reach for the Town side. Donald completed his hat-trick on 34 minutes to become the joint-top scorer in the club’s history, equal with Will Church on 39. {The above photo is by frequent photographer Iain Cochrane – more photos can be found below}

Half-time arrived with no further score. In the second half, Drew McNeil rallied his squad and we could only add Ally’s score to make it six, which was matched by the final goal of the match by Inverness’ Finlay Calder. The game finished 6-1, a record score in the league for Lewis Camanachd.

The club is away to Beauly next Saturday.

In other news, this week teh club was drawn against Kingussie away in the Sutherland Cup, this will be a first visit to the legendary Dell, and the first time the two clubs have faced each other since the same competition back in 2008, which resulted in a 14-0 defeat in the early days of Camanachd Leodhais.

This week also a young Nicolson Institute team visited Skye and had a useful and educational match against Portree High School. An older and more experienced Sgitheanach squad emerged 12-0 winners but it was a good experience for all involved.