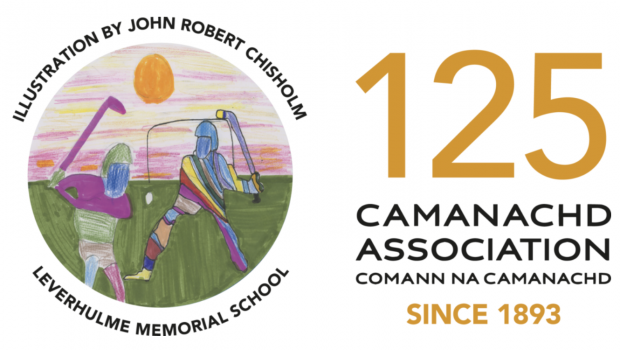 The Camanachd Association marks 125 years this year since its founding in the Victoria Hall in Kingussie on the 10th of October 1893.

A 125th anniversary logo has been chosen after a competition, which attracted hundreds of entries, was won by primary seven student John Robert Chisholm of Sgoil an t-Òib (Leverhulme Memorial School), Harris.

It is great that a pupil from our islands has achieved this honour.  Congratulations John Robert from all at Camanachd Leòdhais.

There are a range of events planned by the Association across Scotland to mark this milestone. One is the International Challenge match between Alba and England this Saturday (28/7) at the Dell, in Kingussie at 7pm .  There are several Camanachd Leòdhais players who will be involved with the Gaelic-speaking team’s fixture which happens after our away game versus Strathspey at 1.30pm. Crisdean, Ally and Dukey are the first team regulars in the squad, along with Sean and Paddy who both long histories with the Alba squad.  Good luck lads. The Player of the Match awards are sponsored by Isle of Harris Gin.

We also welcomed our good friend Katie Drain from the Camanachd Association for a One-Day Youth Camp this week. Thanks to Katie and the CA for runnigns this event along with our local coaches.