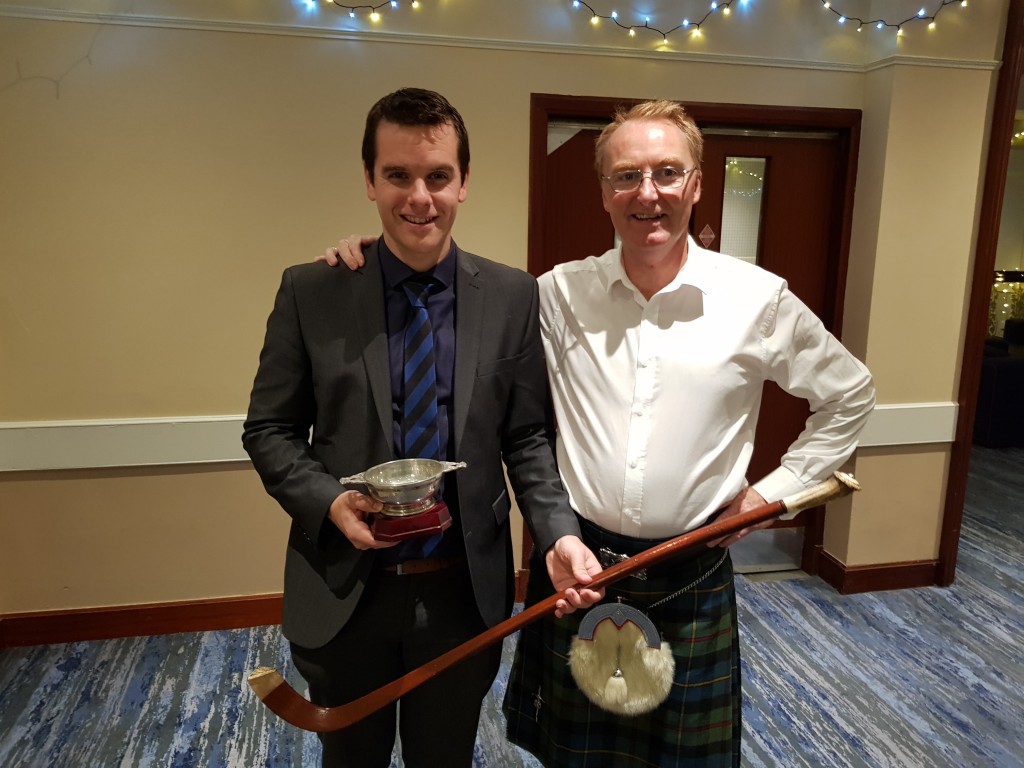 The club held its annual Awards night, held yet again in conjunction with the Craig Morrison Stornoway Sixes on the same day, on the 19th October in the Caladh Inn in Stornoway. We welcomed the competing teams, alongside well travelled fan Roddy Maclean and numerous club stalwarts as the awards for 2019 were made to the deserving winners.

Donald Lamont earned an historic double, winning both the Senior Player of the Year, voted for by his team-mates, and also the Manager’s Player of the Year, earning the Ceremonial Caman from the 1968 Macaulay Cup Final, presented to Donald Shaw, Kyles Athletic – donated to the club for presentation by his son, Dougie Shaw. Donald’s contribution off the field has always been vitally important to the club, but this year was his best season ever in terms of on the park with a goal tally of 11, which also made him the club’s top scorer of all time, and he may have got more and broken the season record if hadn’t been hampered with the injury which he continued to play through until the end of the season.

Donald, who assumed the Club Captaincy duties half way through the season and was confirmed by John MacAskill as continuing in this role in 2020 with Stuart Campbell as Vice-Captain, also made his choice of Captain’s Player of the Year. This went to Callum MacRitchie, who also achieved a unique double as he retained the prize for Young Player of the Year. Callum was unable to attend the event, but his Youth Player Award was accepted on his behalf by Dylan Murray, who was also mentioned by Assistant Manager Andrew MacAskill as being very close to achieving the award himself.

There was also an opportunity for Andrew and Scott MacLeod to be recognised for their recent joint award for the Lewis & Harris Sports Council Youth Coach of the Year Award. John MacAskill took the opportunity to also pay tribute to Paddy Sinclair and Daniel Gallagher for their on field contributions this year which touched on a challenging season, but one which was also very positive and saw the club become the LHSC Club of the Year for the first time.

There was also a successful raffle held which raised money for club funds. Congratulations to all the Prizewinners, and many thanks to those who donated prizes. There was also the fiercely contested Whisky Coin Competition, a new tradition introduced to us by our guests from Strathglass who donated a bottle of whisky for the closest pound coin to the bottle won by Stewart MacRitchie.