Nuair a thill an iomain – When the shinty returned 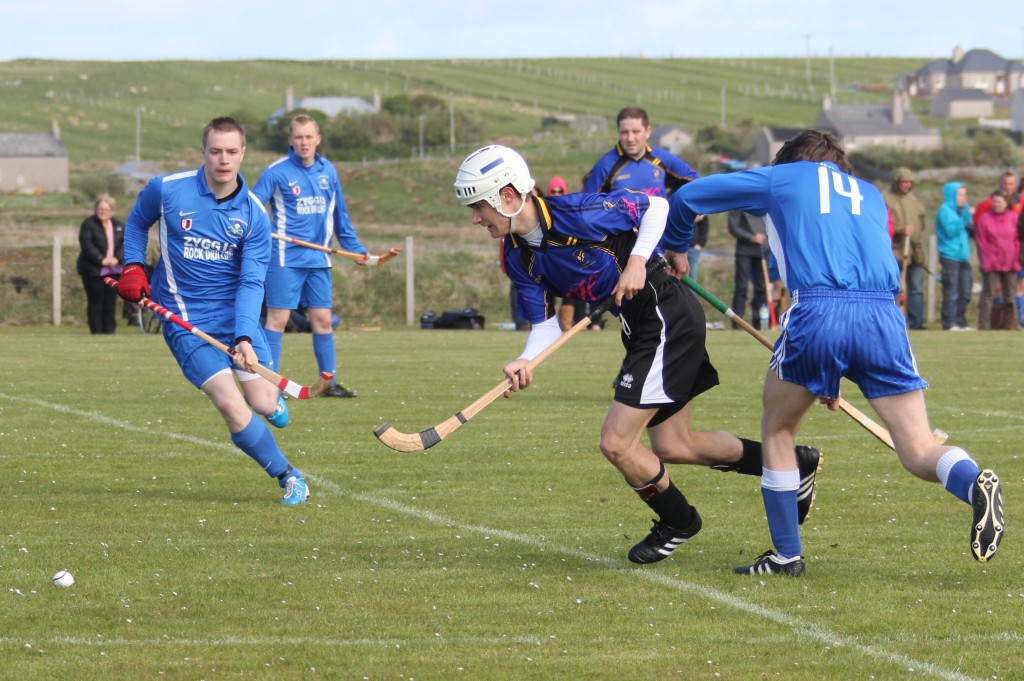 Today nine years ago the very first league game in the history of the Outer Hebrides was played at the Sgoil Shiabost pitch on the West Side of Lewis. Fittingly it saw Camanachd Leòdhais face Lochbroom, who were the first team the club had played when the senior men’s team was started in 2007.

The game went quite easily to the Broom 7-1 but hundreds of people saw history being made on and off the park that day. Many people had struggled and fought to bring about this happening and although we aren’t at the moment able to mark our tenth season as a league club properly, we look forward to next year or whenever it will be safe to return to shinty. 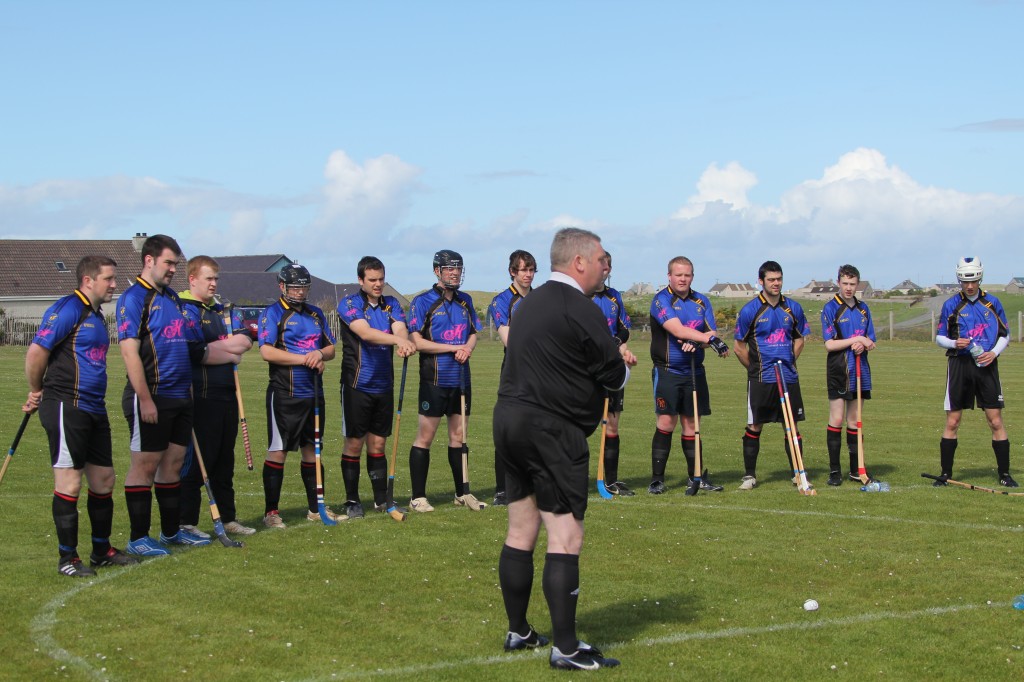 Shawbost for Shinty as Hebridean History made

Camanachd Leòdhais suffered from a touch of stagefright as they went down to Lochbroom in the first-ever game of league shinty to be played in the Western Isles.

The eyes of the shinty world and indeed a great deal of the national media were on a small piece of ground on the Westside of Lewis as the game of the Gael returned to the land of the Gael.

A crowd of over 200 watched as history was made and the game started, a little late due to some teething problems with getting the new goals in place.

Fans came from far and wide, but special mention must go to die-hard fan Kevin “Lamp-post” Morrison, who had driven from Newcastle (via Glasgow to pick up Stuart “Tyson” Campbell”).

Lochbroom had taken a large travelling support as well and although they had left the mainland in heavy rain, the sun shone as the game began at Sgoil Shiaboist.

Lining up for Lochbroom was Martin “Toad” MacLean, who had played for Beauly in the last senior shinty game in Lewis, the Mod Cup against Skye in 1987.

Lewis started the brighter of the two teams, despite having not been able to have a warm-up but Donald Lamont and Calum “Stompy” Stamper did not take advantage of the opportunities which fell their way.

Unfortunately, the first goal to be scored was a Lochbroom one as Sandy Urquhart took advantage of room to blast the ball past Conor MacDonald after quarter of an hour.

Lochbroom were then on the front foot and they doubled their lead 5 minutes later with a messy goal that MacDonald almost stopped with his foot and then went in off the post.  Josh Talbot was the scorer.

Captain Scott Murray struck a long ball in from 40 yards which deceived former Scotland Under-21 goalkeeper Ruairidh Hughes.  This historic strike was greeted by a roar from the watching crowd.

Sean MacLeod was having a fine game on the left wing having cut out the flights of fancy which have blighted his game for large parts of this season. In fact his opponent was substituted just after Murray’s goal by James “Ach” MacRae, who has links with Bernera, due to his dominance.

Then the mistakes which would cost the islanders the chance of winning the game started, the first one from Eòghan Stewart, who in a rush of blood to the head ran to tackle Talbot leaving Urquhart totally free to receive a push pass and slam the ball home.

Steven Bellshaw began to pull the strings at buckshee forward and his pushing and prodding pulled the defence apart, with Gallagher, Duke and Stewart all over the shop, Talbot grabbed the fourth and with the Lewis centre-line being drawn back to assist, Broom’s full centre Jamie MacFadyen used the room this created to score with 5 minutes left of the first half. MacFadyen was very impressive and got the upper hand on both Murray and Campbell in midfield.

The second half saw the game settle down and Lewis again had the best of the play despite playing against the wind.  The forwards were too profligate yet again although debutant Daniel McFadden showed in spells that he will be a great player in the future.

Any chance of a Lewis comeback was ended on 65 minutes after a concerted spell of scrappy defending, which might easily have been ended by simply putting the ball out the wings, resulted in Bellshaw scoring a scrappy goal that emerged from a melee on the edge of the D and rolled in, Stewart stretching despairingly to clear as it finished two inches over the line.

Lewis rallied again but MacFadyen scored the goal of the day when a well worked piece of play between himself and Paddy Wilson split the defence.  However, Stewart tackled him and it seemed that the big Gaelic teacher had pinched the ball, however the bounce favoured MacFadyen and he carried on to slot the ball home with quarter of an hour remaining.

Na Leòdhasaich then began to fade in the last fifteen due to a lack of fitness but nevertheless they closed out the game without any further damage, although they were disappointed to have conceded more goals against Lochbroom than against any other team in the league bar Aberdeen.

The large crowd stayed for the full game and almost on cue an Atlantic squall hit 5 minutes after the final whistle.  Of course, such a large crowd will not be the norm but if even a quarter of these new shinty fans return each week it will be a great boost for both the moral and the coffers of the club.

Lewis manager Paul Duke, who was watched by his new-born son Seumas, “I think that the occasion got to us especially as we were running around putting things in place up until the last minute. Our all round general play was good we just suffered from a few simple but catastrophic errors by the defence.  We also didn’t take any of our chances up front, scoring goals changes the complexion of a game. That was Lochbroom’s strongest possible side and they also had the edge in fitness.  I want to send a message to our players especially the youth, they need to start attending training and getting fit if they expect to get on the park.”

Lochbroom double goalscorer Sandy Urquhart said “We were very impressed by the Lewis boys, they have improved greatly, the score didn’t reflect their level of performance and we all had a great time in Stornoway.”

Despite the score, it was a highly successful day and in the post-match function at Stornoway Golf Club, sponsored by Harris Tweed Hebrides, a range of speakers including Harris Tweed Hebrides chairman Brian Wilson and Camanachd Association president Archie Robertson, paid tribute to both teams, to the individuals, both past and present, who brought shinty back to Lewis and Harris and to the historic nature of the day.

This was Robertson’s first official visit as President of the sport’s governing body. Although he was clear to point out that Lewis are still “on trial” as regards continued league entry, it was also evident that he was impressed by the whole set-up.

Also speaking at the function was Hugh Dan MacLennan, who commentated on the game for MacTV.  The esteemed shinty historian praised the surface at Shawbost “It was certainly one of the finest surfaces in shinty, it is a fantastic facility.”

So history has been made, and now begins the normality of regular matches in Lewis.  Next up is Ardnamurchan this Saturday, Lewis will be looking to avenge a 6-2 defeat in Strontian last time out.  Come along and show your support.