Lewis Camanachd and the Cup Crusades

The Camanachd Leòdhais story is inextricably linked with the cup.  For the first four years of its existence, the team took part solely in cup competition.

These were times of real rigour, but the amazing thing is that none of these heavy defeats ever made one player decide to turn around and call it a day. In fact they helped mould the diehard spirit of the club which has brought us to where we are today.

Needing access to some form of fixture, Lewis entered the Sutherland and Strathdearn Cup in 2007, mere months after the club was reconstituted. There was obviously some curiosity about this event, being the first time a Western Isles side had taken this step. 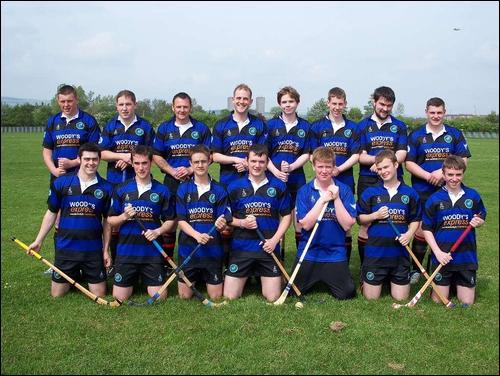 In the first season, Lewis were landed with a four day trip to Glasgow over the May weekend for their inaugural cup tie in the Sutherland Cup. The club left on the Friday, just as news filtered through of the historic SNP victory in the Scottish Parliament elections. The club started slowly against a GMA second’s who were 4-0 up in the first 25 minutes. However, Lewis rallied and started to carve out opportunities, and were awarded a penalty towards the end of the first half. Unfortunately, Dukey fired the ball over and it was to be another two years until Lewis grabbed a competitive goal.

Lewis faced a real test later that month in the Strathdearn Cup against a rampant Fort William seconds which combined the steel of their 1992 Camanachd Cup winners with several youngsters who would pick up Camanachd Cup and Sutherland Cup medals. The fact that Fort were beating teams in their own league habitually 7-0, 8-0 meant that an 11-0 loss against one of the mightiest second teams for many a year was no real disgrace. Duncan MacIntyre said he was “never so tired after a game of shinty”. 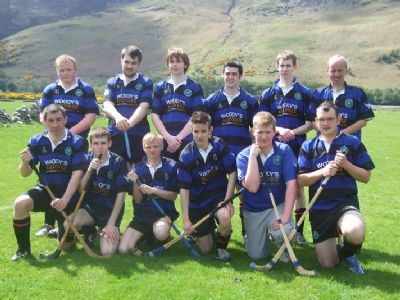 Season 2008 was a real transition season with Eoghan moving to Skye, Duncan being hit by the misfortune of a house fire and Tyson moving to Glasgow. However, Stompy made a comeback and the club continued under the auspices of Conor as manager.  He faced a real baptism of fire with a 14-0 defeat against a Kingussie Colts team in the Sutherland, which had at least 5 or 6 Borthwicks involved, from both generations.  Dukey has never forgiven Eoghan for pointing out his Newtonmore connections in the run up to the match in the Press!  The cup season concluded with a Strathdearn defeat to a young Lochcarron reserve side 9-0, with present day signing Kenny “Duffy” Murray refereeing. The side that day might have been called understrength, but probably called on every shinty player on the island at that point. 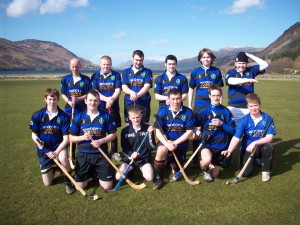 Season 2009 saw the club’s first attempt at playing Aberdour postponed by the now classic “Ferry sailing but the wrong way”.  The game, originally scheduled for Inverlael, was eventually played at the Bught Park, but an early throw-up and a lack of match practice saw Lewis succumb 5-0 to the Fife side.

A rematch with Fort William was in order at Inverlael, Fort were still top dogs in reserve team shinty at the time but Lewis battled manfully in the first twenty five minutes, making Fort work hard for their three goals. (Success was relative in those days!) Then out of nowhere, Ally MacKenzie fired home a rocket from thirty yards, across the keeper into the road end goal. Lewis’ first ever competitive goal! To make matters even more intriguing, he almost repeated the feat straight from the throw-up, the ball flashing wide. Then the house caved in. Fort were 11-1 up at half-time, and finished with a thumping 20-1 scoreline to take home to Lochaber.

This sadly marked the last appearance of our dear friend Craig Morrison in the club colours and he is still greatly missed. He was so often the crucial man in terms of getting a team on the park and his passion for the sport was unrivalled.

After a painful 2009, season 2010 saw the club feeling better about itself, with Dukey and Eoghan teaming up to co-ordinate the squad,  but it was to be a rude awakening. No Minch Cup meant that the Sutherland clash against Inveraray at Inverlael was the first action of the season. Lewis battled gainfully in terrible conditions and put in a brave performance, 6-0 down at half time and 3 goals (one a BGT own goal) lost in the second half, meant it ended 9-0, but it was a match that showed promise. False promise. 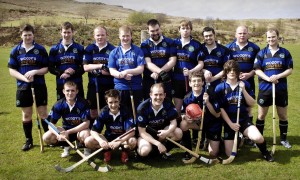 For then came a Strathdearn Cup tie with Skye. The decision came to switch the fixture to Portree from Inverlael, Skye Reserves were struggling badly at the foot of the table in North Division Two and couldn’t buy a result. On a day where nothing seemed to go right, Lewis duly obliged, an 18-0 thrashing was one which really was a body blow to club esteem, but at least we were looked after by our Sgitheanach friends afterwards.  It might have been a killer blow to the club, if not for what followed in the month after, the Far North Sixes, the first Craig Morrison Sixes and the HebCelt win.  Those moments gave the club hope for what was possible.

What came out of these fixtures was a sense that shinty in the Western Isles would remain a sideshow, indeed, a curiosity, if drastic steps were not taken to secure more permanent, regular competition. Two games a year was not enough. The bold decision to enter the leagues full time was taken, due to no other realistic pathway being put in place. That is a story told elsewhere, but the cup campaigns were placed to one side to allow the club to focus on developing its league status. The strength of will and mind that it took to take such beatings and carry on allowed the club to face down its doubters and critics at home and abroad and emerge as the strong, proud team we have today.

In 2014, it was felt that it might be appropriate to enter the cups again, in particular as North Division Three had been reduced to only six teams. It had been a long time coming, but with the Sutherland Cup against Lovat in April 2014, the cup story of Camanachd Leòdhais began anew.  Lovat showed their class as one of the great names of the sport by making a presentation to the club to mark the first ever match between the sides. 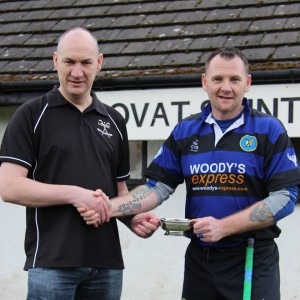 The hosts were a cut above on the park, but Donald Lamont at least grabbed the club’s second ever cup goal, in a 7-1 defeat where Lewis were beaten but not broken and could come away with their heads held high against a team who had won the National Reserve cup in 2010.

The Strathdearn Cup saw one of the finest individual performances at Shawbost – unfortunately it was from a Strathspey player – as Andrew Hay, the 2014 ND3 Player of the Year bagged two of the best goals seen on the West Side a minute both sides of half-time to take the tie away from what was an experimental and young Dubh is Gorm side, who had been in touch still at 2-nil down before the Grantown men pulled away for a 6-nil victory.  The Spey would go on to reach the semi-final of the competition where they lost to Skye.

This defeat led to Lewis taking their place in the little-lamented Strathdearn Plate, which was played in 2014 only.  It was also a little lamented result as we faced Lovat again, only this time there was very little honour in defeat as the club succumbed to a 10-0 drubbing with powerhouse Sandy Tulloch at full-centre giving out a shinty lesson.

In classic Lewis style however, the club learned from all three results and have used them in seeking to better the club. The make up of the new North Division Two in 2015 meant the possibility of at least four over night stays, so it was felt that a focus on this much tougher and geographically spread-out league would be best.  However, with a more mature squad and a better ferry timetable, 2016 sees the club return to the pursuit of silverware (or at least a few goals and a first round result!). Hopefully the 2016 cup adventures will hold a little more glory for the Dubh is Gorm, but it will be exciting to face up to at least one new opponent in Oban Lorn, as well as hosting a game at the beautiful Shawbost.  To pick up on a line from the original version of this article, shinty is no longer a sideshow in Lewis, it is rapidly becoming the main event.  Come and support wherever you are.