Even with a free weekend this week, July continues to be the busiest month of the year for Lewis Camanachd.

Iain and Paddy are down in Harris this week coaching at Feis Eilean na Hearadh. They have 15 kids involved in classes and hopeful many of these kids will get involved in shinty in the years to come.

We host Lochbroom on the 12th of July at Shawbost. This is shaping up into a very important game which will decide which half of the league both sides play in.

Then we have the Commonwealth Shinty Camp from 14th-18th July. The camp is always an exciting time and important for our youth development. This is being run in association with Comhairle nan Eilean Siar’s Motiv8 programme and The Co-operative. 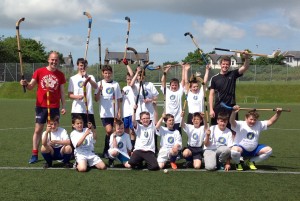 A tough shift on Saturday, but Lovat a very strong side and not a good time to have one of our poorer performances of the season. All players should get to training, as well as doing their own thing, and if off island should be doing their own training.

Are you attending @HebCelt this year? Come to the rip-roaring shinty cup on Sat 19 July, 2pm Stornoway. https://t.co/bga762DHnR #hebcelt