Best Wishes to Sean & Joanne – A Tribute To The Gob

As a club we’d like to mark the first ever Camanachd Leòdhais wedding with a tribute to the man in the middle tomorrow, Sean ‘Gob’ MacLeod as he prepares to wed his beloved, Joanne MacDonald. The boys are buzzing for the ceremonies and we’re looking forward to carrying on after the Kilmallie game.

Sean is an Honorary Chieftain of the club, having been elected the club’s first President in 2006. Sean played throughout the cup years but the highlight of his early career was attending the Camanachd Association U17 Development Camp in Summer 2007 which then resulted in a call up to the 2008 Development Squad which toured Ireland and where Sean scored a goal.
He has had a long passion for Gaelic Games and has continued this obsession with his active involvement in the Alba Gaelic Squad, having represented the team in all five fixtures to date, starting in Oban in 2007 and continuing in Portree in 2012. He has travelled to Ireland and his distinctive voice is known from the Tigh Chualain to the Tongadale.
Sean was as delighted as anyone when the club entered league shinty in 2011 but a move to Glasgow half way through that first season led to a move to Tayforth Camanachd, where he gained some more experience. Halfway through the 2012 season Sean returned to Lewis and whilst he has been reasonably busy in the lead up to the nuptials, with appearances restricted to the bench this season, he remains a positive member of the club, not just a player but a supporter as well.
A well known local personality, Sean always takes the opportunity to push shinty and Camanachd Leòdhais on everyone and anyone, although we aren’t sure yet if Joanne has assented to Black and Blue ribbons on the chairs.
With more nicknames than you can shake a shinty stick at, from Bones to Rubens Banterchello via Seany Epic, we wish Sean and Joanne all the best for the future, gur math thèid leibh! 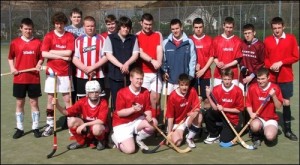 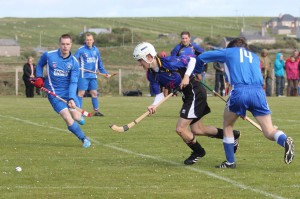 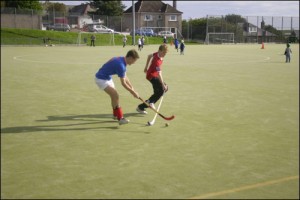 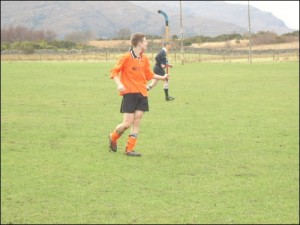