A brave, fighting performance took us into half time in this game in stunning weather at Canal Parks 0-0. Unfortunately we let it slip in the second half and especially with a couple of sloppy goals in the last ten, 5-0 wasn’t a fair reflection of the balance of play but neither was it the “pumping” that the Kilmallie first team charmingly put up on their facebook group before the game…

Kenny Mould was in incredible form between the sticks and everyone put in great effort but there were still quite a few simple errors and a lack of goals. Next week is Inverness at the Bught Park before a week off then Strathspey at Freuchie Park.
The two shots are courtesy of Diablo, one of the team with Ben Nevis as a backdrop and the other is of Eoghan and Connor, Connor making his debut with 15 minutes left to play on the same team as his cousin for the first time.

Remember Hugh Dan’s Da Mhaide Dhireach this Tuesday at 7.30 at An Lanntair. 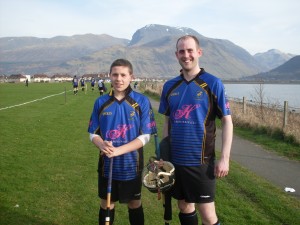